A Leader in Criminal Defense 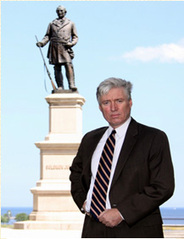 Lawyer Edward Hunt practices his vocation in many venues.

Admitted to Practice before the United States Court of Appeals for the Seventh Circuit.

Written Briefs in Cases There.

Oral Argument in Cases There.

Won the reversals of wrongful convictions in the Wisconsin Appellate Courts and the U.S. Court of Appeals for the 7th Circuit.

Serves on the Emeritus Panel of the Federal Defender Service of Eastern Wisconsin.

Past President of the Wisconsin Association of Criminal Defense Lawyers.

Appeared as a legal expert commentator on Court TV’s “The Best Defense.”

Same will, the drive and preparation to succeed found on the rugby football playing field and the finish line of a marathon prepares one for a life in trial and appellate courtrooms.

Life is a contest.

Except when you have won the jury or court trial.

Appeal to the Wisconsin Courts of Appeals.

Appeal to the United States Court of Appeals for the Seventh Circuit.

Since 1991, Hunt Law Group, S.C. has been defending clients accused of crimes in Wisconsin. Mr. Hunt is an accomplished and respected trial lawyer who has the ability to fight for you at trial. He has earned an AV® Preeminent™ Peer Review Rating by Martindale-Hubbell®, the highest recognition possible in the legal industry, for his professionalism and ethics.

If you have been charged with a crime, it is imperative that you contact an experienced criminal defense attorney to defend you. Call Mr. Hunt at 608-218-5953.

We will respond to your inquiry in a timely fashion. Thank you.